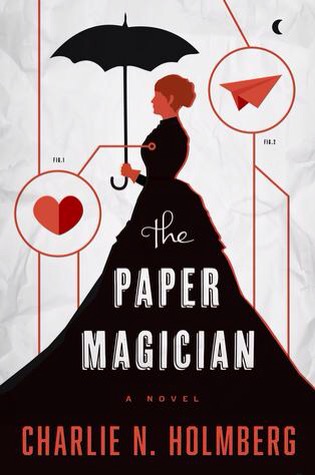 Magic, magicians and magic schools in a rather old-fashioned setting but so much more than a Harry Potter book (which could be good or bad depending on your view of the boy wizard).

Ceony Twill is a young lady who has recently graduated from the Tagis Praff School for the Magically Inclined (great name for a college). In this universe, an alternative Victorian England, magic is practiced through man-made materials and Ceony was hoping to be a Smelter, that is one who uses metals in their magical profession.  Much to her chagrin, Ceony is instead bonded to paper magic (viewed as the weakest of the magics) under the apprenticeship of Emery Thane, an enigmatic, quiet and likeable soul with green eyes.

The use of green eyes to signify atractiveness, danger and mystery must be taught at writing schools and I intend to give a character green eyes if I ever get round to writing a book, which still seems unlikely.

The formal yet quiet and comforting routine of Ceony’s training is exploded when a female Excisionist, a magician who uses flesh and bone, called Lira bursts into Emery Thane’s house and attacks leaving him mortally injured and Ceony bewildered and hurt.

Senior magicians arrive at the scene to take charge and it becomes clear from overheard snatches of conversation that there is a lot more going on than either Ceony or the reader is allowed to know.

Ceony, who has developed a fondness for Thane, takes matters into her own hands and the book becomes by turn darker, stranger and more dreamlike than the initial chapters hinted at.  Odd, affecting and thoroughly readable.

The use of paper for the practice of magic was an inspired choice.  The magic of paper appeals to writers and book lovers and triggers a nostalgia associated with making paper planes, darts, snowflakes and fortune-tellers.

The author is American but gives a largely believable picture of English life.  The only two instances where I suspected the U.S. influence were in the use of the word ‘ornery’ and where a meal of ‘sausage gravy and biscuits’ was mooted. But, these are trivial observations.

Overall, a good book that made me want to read more.