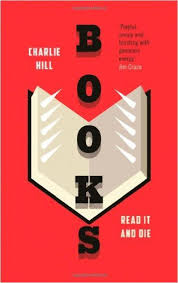 This is Charlie Hill’s second novel and is a very funny satire on books, booksellers and undeserving bestselling authors of male confessional novels.

Our hero, Richard Anger, is a bookselling anti-hero who runs ‘Back Street Books’ in Harborne, Birmingham.  Richard is frustrated, bitter and funny.  I found myself laughing from a very early stage in the book.  Richard tries to cultivate a ‘bad and dangerous’ persona but few people seem to buy into it, seeing him more as ‘unkempt and malodorous’.  Richard rails against mediocre writers.  I’m sure many would sympathise but it raises the question of who judges good and bad books.  One man’s pot-boiler is another man’s best-seller.

On a short holiday to Corfu, Richard meets a photographer in a tavern called Lauren Furrows.  By coincidence, Lauren lives in Birmingham as well and is a Professor of Neurology at the University of Birmingham.  Whilst Richard is attempting to make Lauren interested in his obvious ‘bad boy’ credentials, another customer in the bar who is reading a book suddenly topples over and dies.  The cause of death is later identified as Spontaneous Neural Atrophy Syndrome (SNAPS).

Charlie Hill’s previous book was set in Moseley in Birmingham.  Other suburbs of Birmingham get a shout-out in this novel including Selly Oak, Kings Heath and Digbeth.  I was delighted to see Sutton Coldfield get a mention.

Back in Birmingham, Lauren takes an interest in the cause of SNAPS and believes it may have been triggered by the deceased’s choice of reading material.  She calls on Richard to assist her given his knowledge of books.  The book that was being read at the time of death was by star writer Gary Sayles, a vain hack whose editor and agent attempt to limit him to two clichés per page on his latest novel.  If Sayles books are the cause of SNAPS, then the release of his latest blockbuster could cause a massacre.

In counterpoint to Richard, Lauren’s emotions are carefully managed.  She presents an analytic, dry persona to the world.  One of my favourite passages in the book came in a description of Lauren’s painful memories of her time at university:

in her third year, in an attempt to find a belief system and an individual to assuage the hurt and guilt, she had turned to the East.  His name was Melvin and he was a t’ai chi instructor from just outside Norwich.”

We learn that Melvin left Lauren for another girl who was better at t’ai chi.

It is Charlie Hill’s poetic use of language together with a very droll turn of phrase that really delighted me in this book.

Gary Sayles is clearly unaware of the potentially disastrous effects that his books are having on mortality rates.  Meanwhile his is targeted by Pippa and Zeke, a couple of postmodernists who want Gary Sayles as their next project.  Pippa and Zeke specialise in big, shocking, ironic nothingnesses to which there is no meaning save what the critics give it.  To ingratiate themselves with Gary, Pippa and Zeke pose as Mike and Susan, Gary Sayles’ biggest fans, and put in train plans for a nationwide book reading tour for the launch of Gary’s latest masterpiece.

Meanwhile, Richard and Lauren realise they must do something to stop people dying from reading bad literature but what can they do in the face of committed Sayles fans and general disbelief in the link between SNAPS and reading?

This is a really great read. Charlie Hill is a very talented writer and his books deserve a wider audience.  Read this book, you won’t regret it (unless you drop dead reading it, but then you’d probably be past caring anyway.) 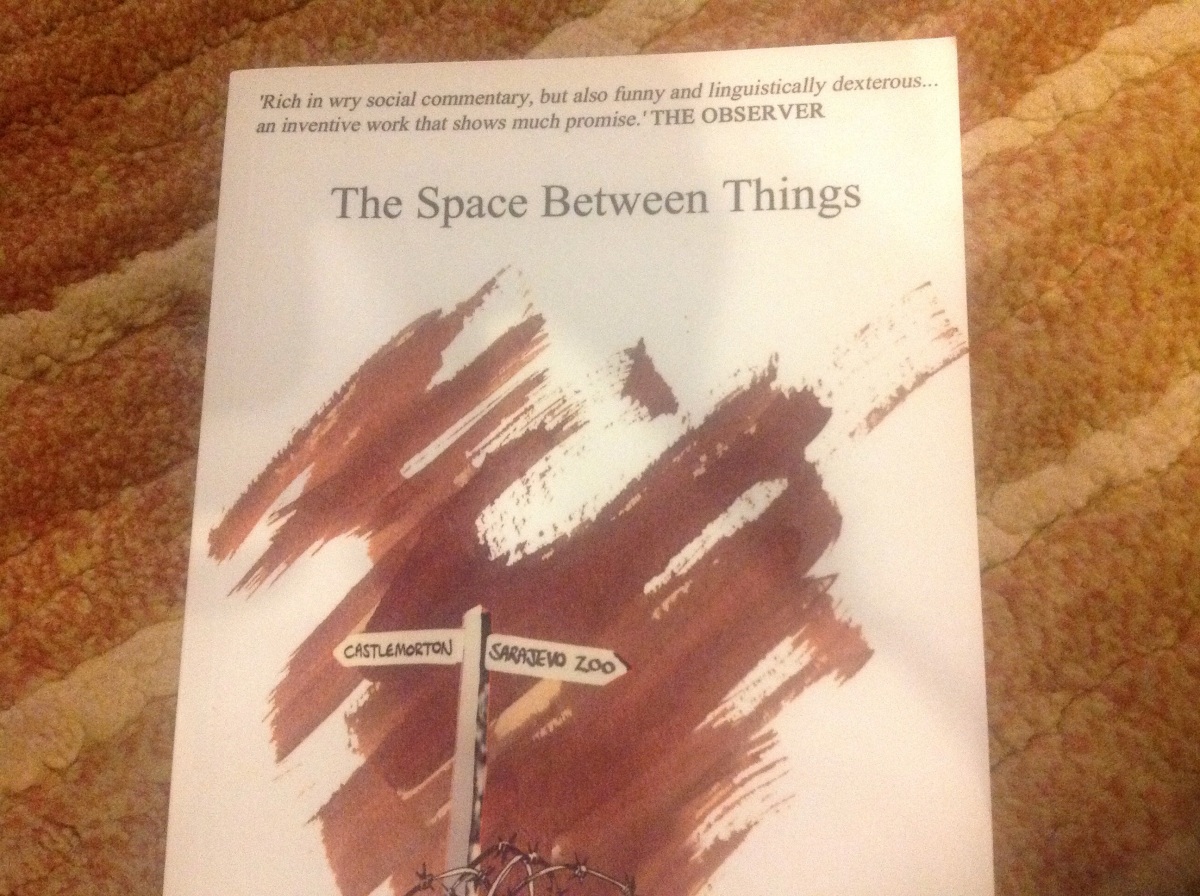 This was Charlie Hill’s first novel. The usual advice for aspiring novelists is to write about what you know. Charlie Hill obviously knows the Birmingham suburb of Moseley very well as his novel is largely situated in its parks pubs and Victorian houses, partitioned and let as flats. The suburb is described accurately in the book. “Moseley may once have been the best looking district of south Birmingham, now it was fraying round the edges, an unremarkable looking place.”

The book is set between 1990 and 1993ish and the domestic and international politics of that time form the backdrop. At a party to celebrate the resignation of Margaret Thatcher, Arch, a dope-dealing, dole-drawing, feckless individual with no prospects and no goals apart from finding the next party, meets a girl called Verity (or Vee). Arch is smitten from the outset. Vee works as a photographer for a human rights agency that wants evidence of atrocities being carried out in the former Yugoslavia where the conflict between Bosnians, Serbs and others is in full-tilt.

Arch too finds politics and a purpose in life after attending the notorious Castlemorton common rave and falls in with a crew of anti-road protestors, full of righteous rage over the plans for Twyford Down. In sharp contrast to Vee’s experience of a humanitarian and political crisis, Arch’s political motivation seems to be an extension of his love of a free party together with an ill-defined demand for freedom. You might ask ‘freedom from what?’ and ‘freedom to do what?’ and the answers would seem to be ‘freedom from The Man’ and ‘freedom to party wherever and whenever I want to.’

Arch feels that he is part of a movement with a worthwhile goal. He has the opportunity to join the anti-road protests, to become infamous like Swampy (remember him?) but never quite takes that step. He remains on the fringes, dancing to techno and dropping ecstasy. However, this is a kind of progression as ‘getting by’ was his previous modus operandi.

The book is peppered with colloquialisms such as Oh’ ar (signalling affirmation), Yampy (a stupid person), Mardy (stroppy or moody) and Geez (short for geezer, meaning mate). Some of these are used particularly in Birmingham but some are universal. Those who try to avoid the much unloved Brummie dialect should not be put off as these colloquialisms are not used to the point of distraction.

The dole-scrounging laziness of Arch and his friends would raise the hackles of most of us who work for a living but the characters are human and there are many funny passages. Arch and his mates dedicate themselves to ‘creative indolence’.

Arch and Vee hook up but for the most part it is a long distance relationship. Vee sends postcards from the Balkans, her memories of Arch and his easy going attitude and simplistic approach clearly buoying her mood after witnessing brutal and bloody scenes. For his part, Arch misses Vee but shows little interest in what she is doing or the conflict. At one point Arch asks a friend, who pays more interest to the news, what the Balkan conflict is about, the response is:

“It’s Serbians and Croatians and Bosnians and anyone else who can lay their hands on a gun as far as I can see. Muslims as well, for what that’s worth. They’re all turbo nutters, Arch, don’t you worry about that. You’ll never work out what’s going on though, so you might as well not bother. Come to think of it, you never used to bother. Why start now?”

It’s a great passage and one that sums up the complicated nature of the conflict and Arch’s previous antipathy for global politics.

Whilst Vee is away, Arch and his pals revel in the press coverage and the notoriety that they and fellow ‘free-ravers’ receive. In their eyes, being vilified by The Daily Mail validates their actions.

When Vee returns, Arch is keen to demonstrate that he is now an activist and is working to change things in England. He does not talk to Vee about her time in the former Yugoslavia through a mixture of disinterest and not wanting to force the issue. For her part Vee recognises that there are serious issues in the UK about the erosion of civil liberties but is not convinced that Arch’s approach recognises the point.

This is a great first novel full of humour, love, frustration and politics. It will strike a chord with all who remember the free-rave scene, the Criminal Justice Act, the tragic events in the former Yugoslavia and anyone who has passed through Moseley. Recommended